CHANGES TO OUR PROGRAMME:
Due to the Coronavirus risk, in line with Government/PHE/NHS advice, we had to cancel our March meeting and AGM just two days beforehand and will not be meeting at The Bell Inn until July at the earliest. Meantime we hope to hold some ‘virtual’ meetings instead, including the AGM in June – see below.
Please keep an eye on our website for updates.

April meeting CANCELLED: we hope that the speaker we had lined up, Chris Hutchinson, will come later in the year instead.
Many SPA and other clubs have been holding remote meetings via Zoom or other technology which is easy to use. We plan to try this out in May and would like all our members to participate. If successful, we can repeat the experience. Our Chairman will send details to members, once confirmed.

Next month’s meeting by video conference TO BE CONFIRMED:
Wednesday, 20th May at 8pm: Simon Van-Orden, an SPA Judge and Presenter, will show his Gorilla and other African wildlife images. We were so impressed by Simon’s images last year that we asked him for another presentation.

Wednesday, 17th June at 8pm, by video conference: AGM followed by projection of Members’ Photos
The AGM (postponed from March): a new notification will be emailed to members at the beginning of June.
Afterwards we will look at the members’ photos that we have already received for the now cancelled May SPA inter-club PDI championship.

ANNUAL SUBSCRIPTIONS:
Good news for our members: The committee has decided to extend the 2019/2020 membership year to the end of June.  Normally it would have ended on 1st April.

2020 ANNUAL EXHIBITION OF MEMBERS’ PRINTS
149 prints were exhibited at Teddington and Hampton Libraries in February and March.
Here are photos of Teddington Library and HHPS Chairman David Hicks talking to Jay Charnock FRPS who opened the exhibition, and of David making his speech. Both libraries said the photos made a welcome addition and that the public was very complimentary about them. 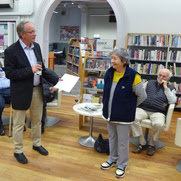 The public voted for their favourite print and votes from both libraries were added together. The result could not have been closer:
1st David Hicks – Grand Mosque Domes (12 Votes). He will receive the Exhibition trophy.
Joint 2nd – Gökhan Darcan – Splendid Moment; and Penny Westmoreland – Red-eyed Tree Frog, Costa Rica (11 Votes each).

SPA COMPETITIONS AND BIENNIAL EXHIBITION:
The SPA has cancelled all competitions until the autumn.
The Biennial Exhibition that was to be held this month has also been cancelled but the Exhibition Catalogue is available to view on the Home Page of the SPA website https://surreypa.org.uk/ along with all the results and winning images, as well as under the heading ‘Biennial Exhibition’. In last month’s newsletter we showed Gökhan Darcan’s photo ‘Majestic’ and here are two more members’ photos that were accepted: David Hicks’ ‘Lost Shoes’ and Judy Hicks’ ‘Omani Still Life’

I hope that you are all well and being careful, and perhaps spending more time taking photos close to home.
Looking forward to seeing a wonderful display at the next competition and exhibition,
All the best,